Rumors about black helicopters have been drifting around in the paranoid sphere for at least forty years now; their function being variously tied to the machinations of the Federal Government, the Trilateral Commission, the Jesuits, some Masonic plot, the Knights Templar, the Priority of Sion, and even the Southeastern Conference, for all I know.

However, really smart conspirators would tend to do their dirty work sub rosa, wouldn't they? Just like spies would. You don't see spies wearing labels like, "Hi, I'm your friendly C.I.A. agent," do you? And, you know, it's off-putting to see grim-looking guys dressed in black even if they don't look as badass at Tommy Lee Jones in the movie!

Therefore, I think that conspiracy buffs should re-think what to look for and worry about. Most black helicopters are just that way because some organization thinks black is a cool color for traveling in. You don't hear about black Acuras as something to worry about, do you?

So, in my opinion, if some nefarious plot is going to require helicopters for transportation, they would choose less sinister colors for their rides. Why not pink helicopters instead? With the aircrew wearing minidresses? And why not have a nationwide chain of front agencies for support? 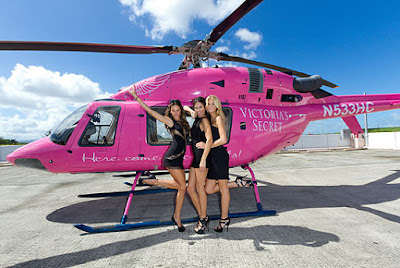 The problem with most conspiracy theorists is that they assume that conspiracies make their presence obvious. Thinking persons worrying about conspiracies should look in other places.

Like the Hoodie Conspiracy, possibly led by a machinist who looks like the villain in The Hunchback of Notre Dame . . . .

The children's hospital in Austin has a delightfully painted helicopter that shows up here on occasion to take a child by air. So much better than black.

Black helicopters look ... well ... ominous. In general, black is a sinister color, except when the Pope arrives in DC and motors to the Vatican embassy in a little black Fiat. The problem with replacing black helicopters with pink ones is that it will prove beyond doubt to all the conspiracy theorists that someone is hiding something because all of a sudden the black helicopters are gone. You can't win. Although I'd like to have the Victoria's Secret ladies try.

Pink helicopters or not, I'm all for the mini-dressed flight crews!

I want a ride in the pink helicopter. It just looks like it would be more ..... 'interesting'.

Could the Hoodie Conspiracy be really led by Bill Bellchick?

I think you nailed it, darling!

A nice celor for a copter. Better than the orange ones.

You are SO right!