You can look at coffee either positively or negatively.

When coffee was first widely introduced into Europe, it was viewed with suspicion, especially because it was available in coffeehouses, which were regarded as hotbeds of sedition.  Unlike in taverns where habitués simply got nicely swocked and disorderly, people tend to be totally awake when they drink coffee.  Sometimes they talk sense about the usual order of things; and this is not looked on with pleasure by the powers that be.  Another reason: coffee-drinking came from Muslim countries, and it was regarded initially as a Muslim drink.  However, Pope Clement VIII declared it to be "a Christian drink" in 1600, and coffee-drinking became okay eventually, except for with the seventeenth century food Nazis.

And make no mistake: coffee is a psychoactive drug.  It is a mild stimulant.  Furthermore, there is some evidence of dependence with regular, large dosages.  Italians drink coffee as a simple self-medication: to get an immediate feeling of alertness.  And, whether we care to admit it on not, many of us do too.  Like me.

Regard coffee-making as a Zen exercise.  You have to have the right attitude and style to do it right.  If you stray from the Eightfold Path, you will make less than a great cup of coffee.  Specifically, you cannot make good coffee if you use a dirty pot!

As a former barista, making and serving coffee was enjoyable because a nice cup of coffee seemed to make people happy if prepared well!  However their day might have been going, at least they could sit down and enjoy a good cup of coffee and enjoy a brief respite from their cares.

Coffee is, in my opinion, a secular sacrament.  You should take it seriously.

When coffee is made, it has a very short shelf life.  When you make it, use it right away!  As a matter of fact, this is the primary problem with convenience store coffee: it stands overly long and becomes bitter.  And a bitter cup of coffee embitters the drinker.

I wonder if many marital problem have their beginnings with a poorly-made or bitter cup of coffee.  And maybe some of the great screwups of government are due to bad coffee.  Maybe we ought to pay more attention to what kind of coffee is served at Presidential Cabinet meetings and how it's prepared!  It's said that the little things get us down; but coffee is more than that.

I drink chicory coffee about 60% of the time.  Usually, I adulterate it with evaporated milk or Half-and-Half.  A teaspoon of sugar can also be added, if needed.  Sometimes a little Sambuca or Fra Angelico will make a festive coffee for an evening's drink for you to share with a lover!

Experiment with other liqueurs like Irish Cream or Grand Marnier: you will be doubly delighted with one of your own creation! 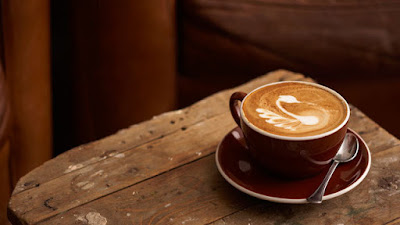 Coffee is a necessity for making people civil.

Ah Angel, you and my daughter would get along quite well!

Oh, and it's been decades since I've had chicory coffee.
There was a retired woman that lived in the same apartment complex when I was in New Orleans. I would visit with her on Sunday mornings before reading her Sunday Times Picayune. She wouldn't let me read the paper on the patio; she let me take it with me and bring it back later.
She would say, "John, if you're going to drink my coffee, you're going to talk to me. If you want to read my paper, take what you want with you and bring it back when you're finished!"

I adore my morning coffee

and later in the day a spike of a little something, something is a delight

There isn't enough sugar on the planet to get the bitter taste out of coffee. Every once in awhile I find another person that agrees with me.

The Bastard King of England said...

I like a big cup of coffee, with three or four teaspoons of sugar. Irish whiskey is a good additive.

Coffee is my liquid equivalent of jumper cables in the morning ... I cannot write my blog without it, at least not at the time I usually write. And as for chicory, the less said, the better ... I was happy to finally move away from Louisiana to escape horrible chicory coffee!

The Mistress of the Dark said...

Now I want my Peppermint Mocha!

John Hill -- That sounds like a civilized morning, chicory coffee and the Picyaune.

i have to have my morning coffee! but it is simple folgers w/ a spot of milk. :)

Peet's is my favorite brands.