Determinants of Attraction to the Opposite Sex

"Beauty is in the eye of the beholder."

But are there some universals regarding the perception of attractiveness?  More than was originally thought.  Women are seen as more attractive if they have ‘baby-faced’ or feminine features such as large eyes, a small nose, a small chin, full lips, and youthfulness.  In general, women's perceptions as to what is more handsome involve features such as strong jaws, broad foreheads, and musculature – features that suggest strength and dominance.

What about body proportion?  There's some interesting research there.  In general, men find a woman’s shapes to be most attractive if she is of normal weight, neither too heavy nor too slender, and has a waists that is narrower than her hip. The most attractive waist-to-hip ratio is a curvy 0.7 in which the waist is 30% smaller than the hips. In most cases, women who are overweight are judged to be less attractive than slender and normal women are, but thin women are not more attractive to men than women of normal weight.  By contrast, many women tend to equate slimness with beauty: Audrey Hepburn was the Platonic example of this type. 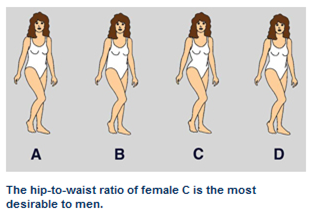 Some other features may influence the perception of attractiveness. Both men and women tend to prefer partnerships in which he is taller than she. A potential partner’s body odor seems to be of influence as well. Lastly, women are more attractive to men when they have longer rather than short hair.

There are behavioral determinants of attractiveness, too.  Women are more attracted to men who are kind, polite, and who like children and animals.  As a matter of fact, being seen as caring for a pet (as long as there's not too many) is viewed as a positive sign by members of both sexes.

I hope no one is offended by this. Just reporting some recent scientific research.

A great illustration. Specifically, though ......what sorts of odors are attractants to women? What would cause you to turn your head?

They prefer female A in Cleveland; B in Michigan.

This is a very interesting subject. I've read that in many cultures, a woman who is more on the chubby side is considered more attractive, perhaps because it indicates she's well-fed, healthy, and so more likely to be a good bearer of children. For my part, I've always been attracted to dark-haired, dark-eyed ladies ... which is obviously why I married a pale German redhead. For some reason, unlike most men, I'm also partial to women with hairy arms. But in the end, women are like Christmas gifts - it isn't the pretty packaging that's important, but what's inside the package that counts. Merry Christmas!

Bilbo, you made some very wise and kind observations. Undoubtedly, culture does play a role.

Anonymous, research does not support the idea of pheromones as sexual attractants. Probably, a man being clean and wearing a nice artificial scent works well. I favor lime- or lemon-scented fragrances; but most soaps smell delicious!

Having world-class hooters doesn't hurt, either.