A Flourish of Strumpets

New Orleans photographer Ernest J. Bellocq did a series of photographs of prostitutes in Storyville, the famed red light district in New Orleans.

He was known retrospectively as an eccentric; not a mean feat in New Orleans where eccentricity flourishes like St, Augustine grass and hibiscus. Ernest Bellocq was known as a commercial photographer in his lifetime.  It was only in the 1950s that his secret avocation of portrait photography of the prostitutes of Storyville was discovered by Lee Friedlander.

Storyville was the notorious red-light district in the Tremé faubourg. It was so-named after Alderman Sidney Story, who proposed the ordinance limiting prostitution into this district. Alderman Story was not pleased at the name popularly given this district. That's a shame; most citizens know the names of few of the former mayors and city commissioners but his is remembered.

The district itself had both elaborate parlor houses and flimsy shacks (called cribs). The newly-emerging music form called jazz developed here. It became a haven for all sorts of unsavoriness: it became a tourist attraction.

The harlots accepted Bellocq, and several allowed him to document them and their lives with portraits and candid shots. Here are some examples of Bellocq's work. I have left out nudes, but they can easily be found with a Google search (NSFW). I have a sense that the photographer and the prostitutes were sympathetic with each other, and he respected their dignity.

Storyville was closed down by the Navy Department in 1917.

Unfortunately, E. J. Bellocq was not served well in either books nor movies that used him as a character. Louis Malle's Pretty Baby was especially notorious.  Malle's disgusting film (in my opinion) slandered this fine photographer, as well as had a then-twelve-year-old child appear in a nude scene. Don't waste your time with such cinematic dreck. 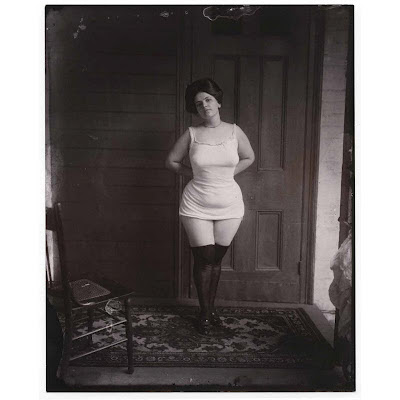 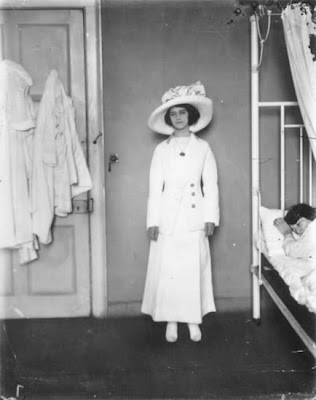 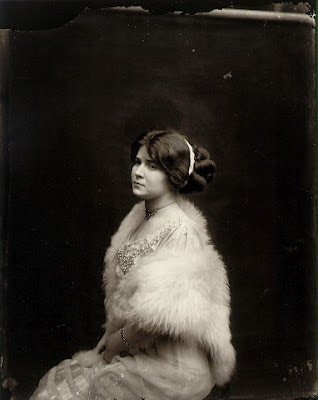 Posted by eViL pOp TaRt at 7:03 AM 5 comments: Links to this post

Authoritarianism as a Political Bogeyman

One by-product of our periodic elections is our latent tendency to try to explain what is going on in psychological or sociological terms. And, naturally, there's always someone from those disciplines who will offer quasi-erudite explanations for why people might be supporting a candidate that the professional in question finds to be unacceptable.

Call that bemerding the opposition, to put it in quasi-French and therefore polite terms at least for monolinguists. This is nothing more than the equivalent of saying that people who disagree with me are wrong-headed, wicked, or possibly crazy. A cheap shot.

One such example is the old authoritarian personality, a person given over for fascistic impulses, supposedly a person who was brought up strictly; who has a strong superego coupled with a weak ego that deals with id impulses by suppressing them.

Just a little aside back to old Freudian interpretations, which no one takes seriously any more.

Anyway, the so-called authoritarian personality is allegedly one that is disposed to fascism. This theory was posited in the post-World War II era when worries about fascism abounded. They developed a scale to measure authoritarianism, The California F Scale. Actually, the scale was flawed because of what we know now to be a rookie mistake: the items on the scale were keyed mainly in the positive direction. Therefore, people who simply tend to agree with statements regardless of content tend to come out as faux authoritarians. They just were agreeable; or in the lingo of the time, socially acquiescent.

Lately, this authoritarian concept has been invoked to explain Donald Trump's supporters: They're a bunch of fascists-to-be. Good Lord: our politics have already descended to the level of chimps in the zoo throwing poo at each other!

Actually, this personality construct could be used to cover either those on the right or the left.

Some on the Right might invoke our salvation and continued prosperity as the result of electing a strong man. [Big Daddy].

Some on the Left might likewise this as potentially due to a strong, all-encompassing government and institutions [Big Nanny].

The reality is that most of us are just trying to get by, to muddle through.

Jus† so neither of our Presidential candidates tries muscle-building poses like Vlad the Poser. Do us that service, at least. We have enough to be embarrassed about. Already we have been treated to naked statues of both. That is skerry enough! 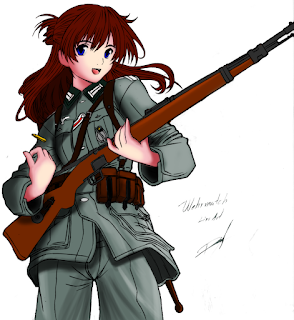 Commemorating the Battle of Yorktown

The American victory at the Siege of Yorktown ended on October 19, 1781.

Artist Joseph Griffith's lithograph effectively, if surrealistically, commemorates this historic victory. Notice that Washington is followed by Waldo, Fonzie, Mr. Kool-Aid, and others. On the right is Osama Bin Laden and Jar-Jar Binks. 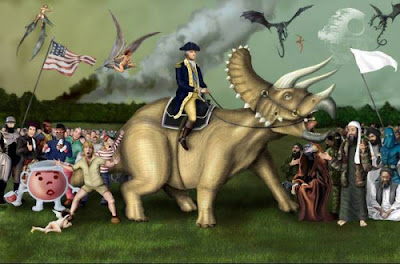 Seriously, this was the last battle of the Revolutionary War, and ensured our independence from Britain, with a big assist from the French. This day should be recognized more strongly. Hell, it was a great move!

George Washington was one of our Founding Fathers whose reputation only increased with time for his actions after the war.

Notes on Twee and Why It Should Be Deplored

Usually I'm pretty up-to-date about language, but I admit to being well behind the power curve when it comes to this latest one: twee.

It started with an article in New York Times, in which the writer discussed the outréness of the word 'fiancé,' asserting that it was "twee."  And I went, "what in the Hell is that?" After all, fiancé sounds a lot more genteel than "the guy I'm shacked up with" when talking to older generations.

Atlantic magazine provided me with a perspective, sort of. It declared twee to be excessively sweet, dainty, sentimental, even to the point of sickening the ironic sensibility.''

Twee’s core values include “a healthy suspicion of adulthood”; “a steadfast focus on our essential goodness”; “the cultivation of a passion project” (T-shirt company, organic food truck); and “the utter dispensing with of ‘cool’ as it’s conventionally known, often in favor of a kind of fetishization of the nerd, the geek, the dork, the virgin.”

I was astonished that the definer of "twee" complained about Zooey Deschanel as being unabashedly twee, like her character in The New Girl was a bad thing. And I must question, why is sweetness, daintyness, and sentimentality bad? When adults are messing up so readily, why not be suspicious of adulthood? What's wrong with passion projects? Why is 'cool' so enshrined? Isn't 'cool' for poseurs?

Nerds, dorks, and geeks might have come into their own. And some people have become reconstituted virgins. Or to borrow a post-Civil War expression, galvanized virgins! 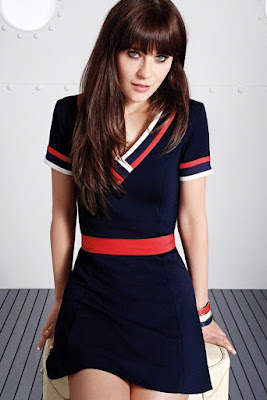 A Tempest in a C-Cup

Over the years, Wonderbra has had a series of definitely risqué advertisements. Some of them featured model Eva Herzigova: 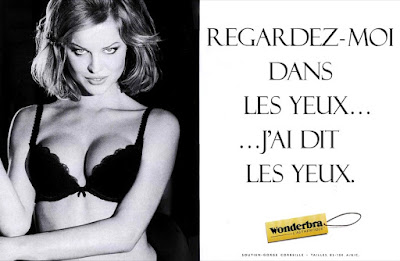 The "Hello Boys" ad specifically generated a lot of controversy because of its' implicit risquéness and the possibility that it demeaned women. The poster was one of those displayed at the Victoria and Albert Museum in London; and it was voted in as #10 in Poster of the Century. 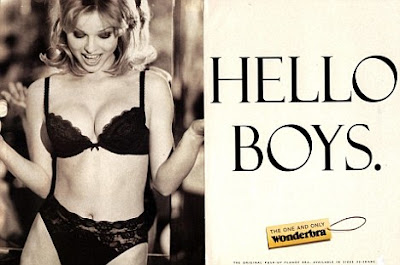 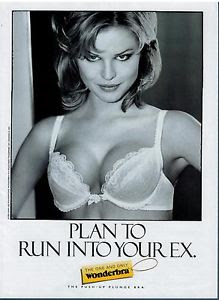 The idea is that the eyes are focused elsewhere: 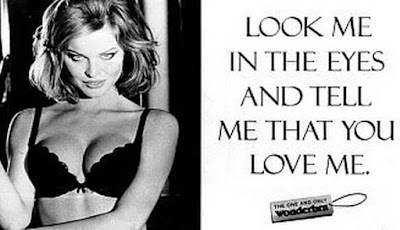 The controversy generated by this series of bra ads (especially the "Hello Boys" one) is that the message behind it is unabashed: a push-up bra is an article of figure enhancement, not simply one of support. It helps the wear display décollété to more advantage.

And it worked. That's why the message was controversial. Is says that "We're not pretending what our bras are good for. They're to make you more see-worthy for guys looking at your breasts."

We Live in Strange Times

The major parties' dog and pony shows are still going on, with the usual strum und drang plus walk-ons by greenie Jill Stein and the geographically-challenged Gary Johnson. Can we glean any intelligence from this? I recommend recent posts by Bilbo as well as discussions that follow.

Oh wait, I can. Don't twitter at 3 A.M. Whatever bee you might have in your bonnet probably should stay there until at least your A.M. coffee break. As a matter of fact, if you have an overbearing or explosive temperament, don't twitter. Period.

One bit of hilarity: The Donald apparently lectured Nevadans on how they are pronouncing the name of their state wrong: It should be "Nuh-va-da," not "Ne-VAD-a." Apparently, how the natives actually pronounce it doesn't count. It's how it's pronounced by the East Coast establishment in NYC. The Nevadans should applaud him for his words to the wise.

And I guess, as outsiders tend to do, the misguided natives of New Orleans should call it "New Or-leenz" and not "New Orlins" or "New Or-le-ans." Over my dead body.

And we have a plague of clowns all of a sudden. This arose in Greenville, SC and spread to other places on the East Coast.  Clown sightings, generally creepy ones, are everywhere, it seems. Sooner or later, someone who is packing heat is going to commit an act of colurocide or panic in the streets. Just in time for Halloween. There's a law of unintended consequences.

Some of this is due to overactive imaginations, some the result of rumors started by kids, and some may be due to asshats playing dress up to scare the neighborhood.

I think that dressing up like Donald or Hillary would work just as well. Or a Member of Congress. Or the typical media mavens from the NYT or the WaPo. Don't send in the clowns! 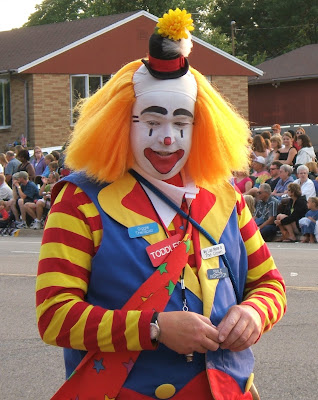 Posted by eViL pOp TaRt at 8:53 AM 9 comments: Links to this post