Evolution has over long stretches of time allowed species to deal adaptively with the basic problems of life in the prehistoric environment. However, with the rapid changes taking place in modern life, the glacial pace of the evolutionary changes no longer as easily allows species to adapt very well. This even affects us humans; for example, we are bombarded by a number of larger-than-life temptations such as supersized take-out food, candy bars, and improbable pornography, each of which impact on instinctive drives with dangerous results. 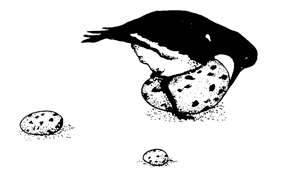 Using gulls, Tinbergen's students found that mother birds preferred to try feeding a fake baby bird beak held on a stick if the dummy beak was wider and redder than a real chick's.

Male stickleback fish ignored a real male to fight a dummy if its underside was brighter red than any natural fish. Tinbergen coined the term "supernormal stimuli" to describe these unreal substitutes. These stimuli appeal to primitive instincts; but paradoxically exert a stronger attraction than the real-life counterparts.

Most supernormal stimuli are contrived; though in rare cases they may occur in nature due to random variation. Since oystercatchers do not deliberately manufacture brightly-hued, oversized plaster eggs; that was not a factor in the oystercatcher’s environment. But the addition of a new element, the meddling by homo sapiens, changed the rules completely.  Bird brains could not handle those supernormal stimuli.

Are humans affected by supernormal stimuli? Evolutionary psychologist Deirdre Barrett suggests in her book Supernormal Stimuli that we do: ours are mostly contrived: very sweet drinks, foods containing high amounts of fats (such as French fries or biscuits made with lard), stuffed animals with infantile features, and so forth. These specific stimuli in their naturally-occurring forms draw out instinctive patterns of behavior that make it easier to perform adaptive behaviors relating to survival or reproductive motives; however, in their excessive, supernormal condition they can possibly harm our physical or psychological well-being. (For example, we have an inborn preference for sweet-tasting substances as those ar related to increased energy; but the prehistoric environment did not have the superabundance of those that can be available very easily today.

Some examples in which the human perceptual environment has been changed through deliberate contriving can be seen in the form of toy animals with hyperinfantile features (e.g., Care Bears, My Little Pony), the use make-up, and with large-sized candy bars.

And we should not overlook supersized breast implants, once known as Bulgarian airbags.  The story behind this slang expression is that a woman who had supersized in this way was in an automobile accident, but avoided serious injury because of the extra cushioning from her new breasts implants gotten in Bulgaria.  Anyway, breasts that are sized out of the ordinary, whether due to nature or contrivance, are very likely to draw attention to the possessor.  Maybe this is why larger-sized breast implants are more common in the L.A. and Las Vegas areas. 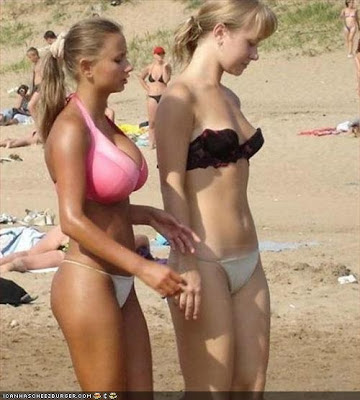 Now that is overdoing it!

A very interesting comparison of different stimuli that have supernormal effects.

I recently watched a documentary on netflix that was about us still being hunter gatherers in modern society.

There is definitely a substratum to our motives and behaviors that had been subject to evolutionary pressures.

Now that's getting evolution to work for us!

All we have in HSV are the Hooters girls.

Very interesting and possibly disturbing. But both girls were easy on the eyes. Neither as pretty as you.

I would say that she supersized too much. Her friend looks more proportional.

So Bulgarian airbags are supernormal stimuli? What a put-down.

The hyperendowed miss in the bottom illustration clearly trumped the bird with the oversized egg, or the gulls with the overmarked beaks. Sort of goes with the concept.

Yay! I can leave comments again!! And I would be interested in studying accident statistics in Bulgaria.

Even though they're silicone, they still look great. Bulgarian airbags should be an entitlement! Down with A- or B-cups!