The Mayor, the Caudillo, and the Bikinis

At one time, Spain was not considered a primo tourist site, in part because it was a semi-pariah nation after World War II.  True, there were a few idiots who went to Pamplona to be chased by bulls, some deeply religious folk who did pilgrimages to Seville to see the creepy Holy Week rituals, and art lovers seeking the Prado.

How tourism opened up, and how the bikini swimsuit first became acceptable in Spain was one of those improbable tales, made more so by an enterprising little Spanish mayor dealing with two relatively unsympathetic persons.

Mayor Pedro Zaragoza was mayor of Benidorm, a sleepy little village on the southern coast of Spain; and he saw some advantages for his community by attracting tourists from the northern Europe countries such as Germany, Britain, and the Scandanavian countries.  However, these summertime guests brought with them certain customs that troubled the very rigid Spain of that time: one was the bikini swimsuit.  Now this was the mid-1950's; and these swimsuits were then novel but hardly daring by today's standard, and Mayor Zaragoza was aware that they were commonplace in nearby countries.  Especially with the sun-craving British who primarily came.

Some of the Civil Guard (those Spanish guys who wear funny hats) arrested bikini-wearers for indecency for wearing bikinis, and the foreign tourists were less than happy.  No status associated with spending a weekend in a Spanish jail as a memento of a visit to sunny Spain!  Mayor Zaragoza saw that this was really driving away business, so he immediately on his own initiative declared wearing bikinis to be legal in Benidorm.

This breach of official morality enraged the local archbishop, who actually played the E-card on poor Mayor Zaragoza.  Yes, he went to far as to excommunicate Hizzoner, the Mayor.  Now that was playing hardball; in effect an excommunication in Spain could have a massive impact, including someone not being able to be hired, serve in office, or go to a university.  In short, the Mayor was screwed!  Some of the other office-holders were supporting the excommunication, seeing Mayor Zaragoza's deposition as being an advancement opportunity for them.

However, Mayor Zaragoza had been once a supporter of Francisco Franco.  Yes, that one!  Not one of the more loveable guys in history, to put it mildly

So one morning Mayor Zaragoza got on his Vespa motor bike at 4 A.M., rode eight hours on it in the cold to Madrid, and got an audience with El Caudillo himself despite being splattered by oil from his motor bike.  Franco was surprised when he was told how the Mayor got there, and offered his support.

Anyway, Caudillo Franco blunted the effect of the excommunication, made the two-piece swimsuit legal, put the archbishop in his place, and affirmed Mayor Zaragoza as the authority in Benidorm.  Senora Franco became a frequent visitor to Benidorm, and the community flourished.

Probably Franco got a twofer on this: he was able to lend aid to a supporter, and also to blunt the dominance of the church as well.  [Yes, separation of church and state!]  Power-wielders tend not to share power well, and some bishops did have a tendency to throw their weight around.  Actually, this may have been one of the first moves towards making Spain less rigid and alienated from the rest of Europe.

Over the next few years, Beindorm grew enormously.  A large number of high-rise hotels emerged.  Thus began the popularity of the Costa Blanca; with its English-like touristy places.  It became sort of a Redneck Riviera for the fish-and-chips set, and tourism became a big business!

In this Costa Blanca area, pragmatism won out over hidebound rigidity; and Spain became increasingly on the European map for tourism.  To some degree this occurred with the Gulf Coast in U.S.  There, standards of conduct are pretty relaxed, even though it's not likely that a mayor of an Alabama coastal town had to ride to Montgomery on a putt-putt to bring it about. 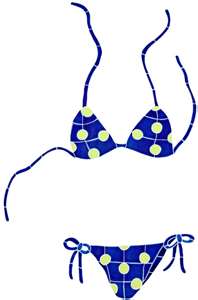 Franko just wanted to see bikini-wearers on his country's beaches.

the catholic church had serious influence for a long time in so many places! their own little ruling party...

That mayor must have been really motivated to ride on a highway in one of those little Italian scooters! I've never been to Spain, but want to see the scene in Ibiza before I get old.

Three cheers for the Mayor!

The Mayor certainly improved the view in his little village!

Thongs were forbidden at Gulf Shores at one time. Are they okay in Spain?

Finally, a mayor I could vote for! Heidi, I would tell you that my observations (based on living for many years in Germany) is that most ladies who go topless on beaches ... shouldn't. However, don't let this stop you from being the exception to the rule!

An interesting bit of cultural change and why it took place.

Definitely a story that leaves us with a titter.