Oh my gosh! It seems like there's a surfeit of woman-related controversy in the news lately.

We begin with politics rearing its ugly head. Last week Madeline Albright voiced the opinion that there was a special place in Hell for younger women who Berned for Bernie instead of voting for the establishment Hillary. I'm glad the lady expressed a concern for my immortal soul, but I figure that whoever does the 11 A.M. Sunday Mass or even Madeline the Prophetess is a worthy spiritual advisor for me.

It's a quaint notion, that I should vote for someone because we might on occasion share a rest room, if Her Ladyship Hillary were to use the same proletarian powder rooms as me! (I feel lucky if there's tissue and soap, much less two-ply.)

Another lady at the same time implied that my possible Berning was due to estrogen-based attraction to cute guys rather than economics or pure political reasoning. Yeah, cute guys get me all the time!

Now to another topic. Wednesday Bilbo reported on John-Louis Rouillon, a French researcher who found evidence that bras were inconsequential for female breast support, they did not serve to stay sagging. However, he took the usual researcher line that a larger sample, perhaps of 300,000 women, would be needed. (This is usually cited when a researcher is jockeying for a larger grant!) Anyway, this is welcome news for those plagued with underwiring or the need to wear strapless bras if true.

Actually, his idea is with merit. All breasts are not equal. Breasts of a 34A size* are likely to show less downward displacement and bounce anyway than those that are 42F! In short, for some of us, the wearing of bras is optional. Then the only problem is concealing tell-tale bumps and avoiding translucent fabrics (if desired). Pro Tip: Good girls don't show. Sweaters are an option combining comfort with modesty.

For Caucasian women, an inexpensive solution then would be to wear Band-Aids. Or you can go with nipple covers. Or just brazen it out.

Actually, going full topless on the beach is too daring for me!

As an encore of my N.F.L. jersey post earlier, I found that N.F.L. fans can also get swimsuits for their favorite team! Even though swimsuit season and pro football coincide very little. This bikini top might work! 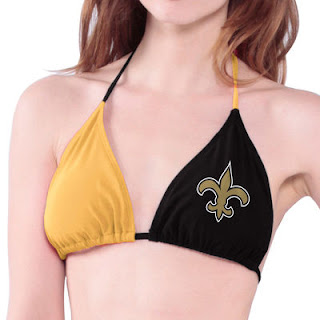 If the Saints win the Super Bowl again, this might inspire a parallel line of guys' bikini fashions for the Gulf Coast beaches! Considering the boobs and moobs of New Orleans, this might be a good thing.

I hope those bikini tops also come in Falcons' style.

Having returned from a recent beach trip where there were plenty of scantily clad, well defined young beach bodies, I'd say that there is as much (if not more) attraction to a good looking body in an attractive bikini as to going topless. It was often difficult to keep from lingering too long viewing some young women and coming across as a creepy old man.

As for team attire -- the only thing I saw was one young couple where the man was wearing a Cubs t-shirt and the woman a Texas Longhorn ball cap (she also wore a nice bikini without logos of any kind).

I'm still frosted at Albright and Steinhem.
Long time before it's bikini season in MT.

Just the mention of the word moobs has me checking myself. Still good. No six pack but no moobs.

Mom would have kittens if I didn't wear one.

One should vote for a person, not a gender. It's ridiculous to consider anything else.

My granny told me that bras were a new fangled thing and probably caused cancer, and that I did not need one......... I obeyed granny for the most part with all the evasions you list(icle) and a few more! Big thick T-shirts are appropriate in any tropical space! Sad to see Steinam and Albright as old fogies who don't comprehend how times have moved on. Sad...
But back in the day, S and all of them really changed a world you would have found stultifying for sure. It's difficult to remain au currant as we age. BB King, Tony Bennet, and me come to mind (I was at Woodstock baby).


You are NEVER boring Angel!

For the record, I need that bra. I wish it weren't true, ha ha.

Having found myself on a topless beach (hey, I wasn't wearing a hat, so I was good) inadvertantly, I have come to believe all women need them and men should never be permitted to wear a thong. EVER. NO MATTER WHAT THEY LOOK LIKE. PERIOD.

I've had the experience of visiting topless beaches in Europe, and my takeaway from the experience is that most people (of either sex) who go topless ... shouldn't. Thanks for the shout, Angel!

Hello, EPT ~
Just got yer comment / question and answered on my own blog.

I'm assuming you know how 'Battle Of The Bands' works - the dates for posting and the basic idea of it. If not, feel free to ask me any questions. I've been involved in BOTB from the very beginning of it (I'm one of the two co-founders of it) and I know 77.6% of everything there is to know about it.

When did you want to start? We have a new Battle beginning tomorrow (Monday, Feb. 15th). Were you planning to begin this soon? Or are you thinking more about starting on March 1st?

If you want to start tomorrow, PLEASE leave me a comment ASAP (here or on my own blog) and let me know so I can add links to your blog on my independent BOTB page and in my blog's sidebar, so you'll get visits from all the old-timers. Otherwise they won't know someone new has joined and your vote total will be lower than it could be.

My weekly work schedule is Mon-Wed, 6AM-6:30PM. So I'm scarcely online during those times. For maximum vote totals, please get back to me tonight, IF you are planning to post a 'BATTLE OF THE BANDS' contest as early as tomorrow morning.