Quite Contrary About Mistresses

The term 'mistress' refers to a woman who is in a long-term amatory relationship with a man who is not her husband.  This relationship might include a component of her being at least partial supported by her paramour.  Famous mistresses, in the sense of being remembered historically, include Diane de Potiers, Nell Gwyn, Madame de Pompadour, Madame du Barry, and Lily Langtry.  One English king, Charles II, managed to have at least two mistresses simultaneously: Nell Gwyn and Louise de Kérouliac.  Now he really got around!

Recently I read in the New York Times about a misuse of campaign funds investigation in New York state.  Among other peccadilios to be investigated, one involved a legislator who was alleged to use campaign funds to pay for a girlfriend's apartment and visits to tanning parlors.

In my opinion, paying for her apartment and tanning puts her in the mistress category.

But wait!  Maybe this is just a sign of the times; or a more sophisticated usage.  Or a way of fending off eager lawyers.  Has the term girlfriend expanded into a euphemism?  I've already commented on the vagueness of that term as including female pals or buddies as well as women that a person (male or female) has an emotional relationship with.  But this is a different category of girlfriend: one that a man does not bring home to meet one's mother.  But maybe one's dissolute uncle!

This gives a new twist to that horticulturally-inclined Mistress Mary. 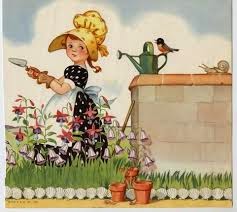 Interesting observation. Perhaps it depends on whether the media wants to put more emphasis on the mistress or not. The use of words in the media can quickly indicate the slant the author and his superiors want to take. Maybe it has to do with how much $$$ can be used to influence the way things are presented? Thanks for the rundown on those previous girlfriends.

relationships are complicated. why shouldn't our labels for them be also? :)

This made me wonder, if a married woman has a man on the side, what's his title?

Over time the dictionary just gets bigger with new definitions of existing words.

Mark asked the question I was going to ask. I believe the term is "gigolo," although that sounds as quaint as "mistress." And is a "girlfriend" different from a "gal pal?" I think the term "kept woman" conjures up unfortunate imagery of a woman "kept" against her will, but perhaps that's just me.

Linda Kay, Mark, Bilbo, the English language has a certain amount of ambiguity by design in it. It's the natural habitat for lawyers, ad men, and pretty bunko artists all in a row.

these are grammatically challenging times - i would have thought that the woman whom a married man has 'amatory' relationships with who is not his wife, is fair game to be labelled a mistress - a girlfriend (to me anyway) has the presumption of being out in the open.

(both have their advantages)