I read recently that properties located on streets in the U.K. that happen to have bad names tend to have lower values.  Minge Lane, Crotch Crescent, and others of that type are examples of what not to call streets in Merrie Old England.  Well, somewhere there's a street named Dingleberry Lane in the United States.  Are the residents there proud?  I don't know.

Anyway, back in the 1820's in New Orleans plantation owner and property developer Barnard de Marigny developed a new faubourg.  He gave streets there such names as Frenchmen St., Desire Street, Good Children Street, Trifle Street, and (most famously) Craps Streets. (All originally in French, of course).   It seems that the reason for the last one was that he was very fond of the game of hazard, otherwise called craps.  However, later on, the City crapped out; changing the names of Trifle Street and Craps Street.  Nowadays the former Rue de Craps is simply an extension of Burgundy Street.

So sad how history sometimes falls.

Also, Slate magazine had an article on the weirdest of the tips for turning on a guy: specifically, putting a glazed doughnut on his penis and munching it off (among other things).  Now, as an occasional reader of Cosmopolitan magazine, I think that the author of the Slate piece got it entirely wrong.  Articles of this type in Cosmo are primarily for amusement, not as a handbook for being a more accomplished person in bed.  I think that sometimes serious writers fail to recognize light humor, particularly if it's slightly salacious.

But, who knows, a couple might find it to be fun.  Sex does not have to occur strictly on a weekly scheduled basis in between watching two television programs and always employing the missionary position! 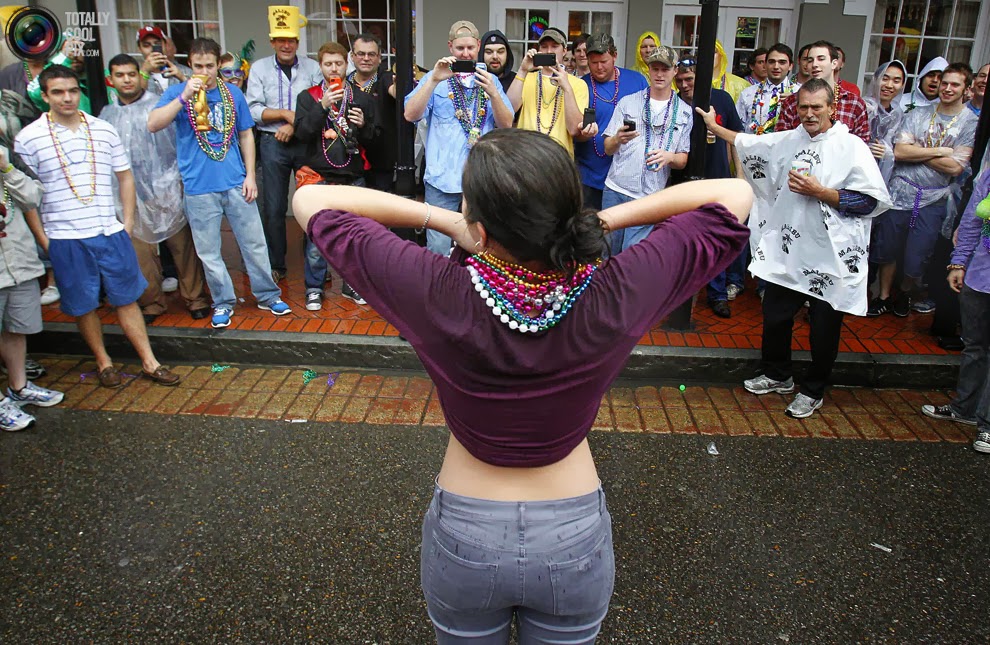 Happy Mardi Gras, I heard it was raining a cold steady rain. Hope it's fun anyway.

I don't want no doughnuts on me!

The day when titty-flashing is okay is here again. Have a great one, Angel!

I have a street not far from me named Peyton Place.

You are just my sort of gal!

I would live on Craps Street!

The Cosmo girl whose guy has a long, skinny unit can play doughnut ring toss!

I wonder what type of glazed doughnut works best? Or is it better with cake doughnuts? Sprinkles?

Did you flash your boobs, Angel?

I'm sure you're familiar with the French Revolution segment of the Mel Brooks film "History of the World, Part 1," where the downtrodden peasants in the slums of Paris live on "Rue Merde." And please don't answer Meredith's question ... I'd rather just let my imagination run wild.