The Heart of Darkness

The Heart of Darkness was a famous novella by Joseph Conrad.  It raises some disturbing questions about human nature and relationships.  In it, Kurtz, originally intending to do good in the Congo, becomes cruel and monsterous in his treatment of the natives.  He ultimately dies; and his final words are "The horror!  The horror!"  Years later, they made it into a movie entitled "Apocalypse Now," starring Marlon Brando and Martin Sheen.
Neither the book nor the movie are exactly light-hearted, if you know what I mean.  And I suspect that the location of this heart of darkness in Conrad's book was internal in Kurtz, rather than geographical.
John Kennedy Toole wrote his outrageous comic novel A Confederacy of Dunces in the 1960's.  In this work, the protagonist Ignatius O'Reilly described his going to Baton Rouge as going into the Heart of Darkness.  Someone stole his hat with the ear flaps on that trip, which convinced him of the perils of travel to dangerous places.  Actually, Baton Rouge is a pretty nice city with more to offer than Alexandria or Shreveport or Monroe.
But I think that The Heart of Darkness is potentially different for everyone.  I see it as Washington or L.A.  Where do you place yours? 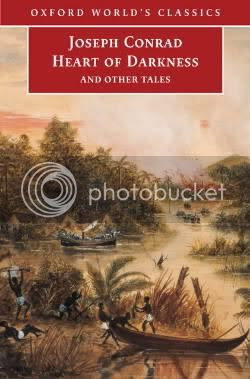 i think it is within all of us and we must be careful to shine light instead.

I'll have to read that book. It is amazing how peoples attitudes can change. The old movie, "Lord of the Flies" comes to mind

My place is on any Southwest Airlines plane. SA is pure evil.

I see the heart of darkness as the depths to which humans may go if not contained by ethical restraints. Kurtz went to Africa initially to do good; but allowed himself to turn into a monster.

The Heart of Darkness was a profound book. Maybe Baltimore is the place in R/L/

"When a true genius appears, you can know him by this sign: that all the dunces are in a confederacy against him."
Jonathan Swift

"Ridicule is the tribute paid to the genius by the mediocrities."
Oscar Wilde