Why are neckties for men expected in semiformal dress; and even women in some cases?

The surprising origin of this garb apparently came from a group of Croatian mercenaries in King Louis XIV's hire wearing bits of cloth around their necks. The Sun King apparently found this to be stylish, so the custom of neckties took off. After all, this was at a time when if King Louis said "jump," everybody jumped. (It is not known what happened whenever he ever exclaimed "Merde!")

It got included in military uniforms; and hypermilitaristic Europe became increasingly neck tied over the next centuries.

By the 20th century, men's ties took on a general shape that has become ritualized, except for the ascot and the bowtie. Tie length and width may vary with fashions. At one time, skinny neckties were fashionable; but wide ties did a rebound, including the psychedelic "blow lunch" tie of the 1970's. I will leave you to figure that one out. But in the 1930's and 1940's, surprising patterns sometimes were used. Here's one that could serve to mark the ending of Prohibition: 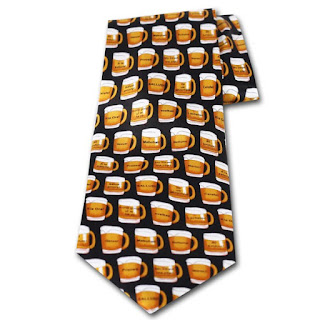 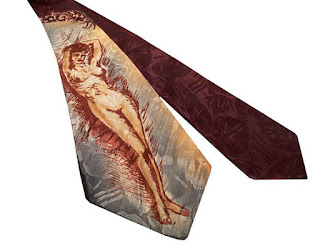 Can this be an expression of sartorial freedom from the clutches of Prohibition and the military? This sort of neckware needs an explanation. However you may judge the wearer's taste, they are probably not good choices for job interviews, unless the person is interviewing for a job as a gangster or a bouncer at a gentleman's club. R-rated ties are generally not worn on Wall Street or in Congress, but things may change with the new administration.

How about a sedate Tabasco pepper tie? 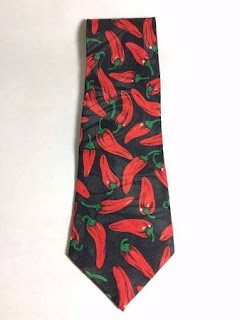 Or maybe express pleasure for living in a particular state: 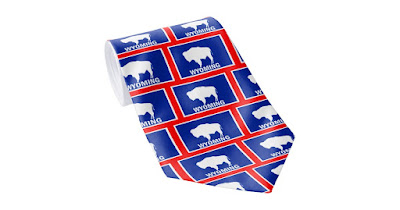 Finally, you can express loyalty to your favorite ailment, like swine flu. Or, at least,  a souvenir of being having been sick:

(Bit of sick humor!) I hope your day and your neck is trouble-free.

Was Oliver Hardy the only person who played nervously with his necktie? I think he had a very nondescript one, but it was an excellent prop.

Was Oliver Hardy the only person who played nervously with his necktie? I think he had a very nondescript one, but it was an excellent prop.

I have some great ties, but seldom have the occasion to wear them. My favorites are from the Jerry Garcia line. I think I have 5 of those.
I have a couple of skinny ties and a couple of bowties.

The Tabasco tie looks quite spiffy. The nude one not so much. I could go for a guy who wears a Wyoming tie.

I call them DPOC's. Dangling piece of cloth. I never did like wearing them not because of the tie, but for the fact I had to button my collar. I hate a buttoned collar choking me. Don't tell me about any devices to help out. I've tried them all.

The ties from the 70's are the ugliest to me because they are so wide and some of the fabric and design is awful...like most of the 1970's fashion. I actually like that naked girl tie because it looks artistic. My ex got a Star trek tie once with Kirk, Spock and McCoy's faces on it-pretty bad.

It would seem that the tie with the nude should be more voluptuous. The state flag ties might work in some cases, but not the ones that boneheadedly use the state seal.

i wouldn't like it if i had to wear fashionable neckties.

Some of these are real hoots..

what a cool fact for my trivia horde! Thank you Angel dear

Such an off sory about cravats!

The nude one looks sort of hoodish or low class,

Though one can get used to wearing a tie, I'm very glad my jobs have never required one.
Like Mike, I hate having my neck constricted by that top button. Even with a large neck sized shirt it's awful!

There is some interesting history here. Those old ties from the 70's I've given several nick-names too. I either call them Barney Miller ties or Pop-Tent Ties. Depends how I'm feeling at the time, or to whom I'm speaking with.

I have always hated wearing a tie for the reasons Mike and Allen have already mentioned, and now that I'm retired I very seldom have to. My philosophy about ties back in the day was that if I was going to have to wear a tie, it would be one that was fun - and I had quite a collection of ... well ... unusual ties. Plus the bow ties I had to wear with my tuxedo for dance competitions, and the white tie I had to wear with my fancy tailsuit.