For some, parenthood is a competitive sport, especially between siblings or neighbors.  It used to be sufficient to rear a child who was not seriously delinquent and who made good enough grades in school; but now the goal is to produce a paragon!  Even better: a paragon that displays their parenting style as being so superior and enviable to the inferior competition!

I'm afraid that this is true with regard to people who claim some French ancestry, however remote.  Louisiana is a far piece from the hexagone and Louisiana children will not be admitted to un grand école in Paris, (especially the ENA, thank God, where they learn to be officious administrators!) but still there is this desire for them to excel, even if it means the child majoring in pre-med or pre-law at L.S.U.  Heaven forbid that Junior has a room-temp I.Q. and the ambition of a cable T.V. employee or sociologist; they must squeeze, cajole, prod, and generally whip him into line and checking off all of those Super Parent Criteria!

But the University is a far distance away in the future.  How can you put some gloss on your little moppet?  One way is to cultivate exemplary television viewing habits for him or her.  And let your snotty cousin hang her head with shame because she allowed her little Hortense to watch Animalmaniacs or Pokémon instead of PBS.

But let's face it:  It's not enough for your child to do well: the process is just as important as the product.  You must out-parent the others.  Have some remarkable claim to parental fame.

Breast feeding, which became de rigeur for with-it parents back in the 1980's, is now considered so mainstream that only those who continue until the child is about six or seven warrant any kind of fame.  And you're expected to have your child take music lessons, and learn a second language, and play soccer and t-ball, and learn to meditate.  Good golly, you all, it's hard to be a competitive parent nowadays!  Some refuse to play, and homeschool their children.  Or is that the nuclear option in competitive parenting?  This is generally not advised, as parents who try this may tend to procrastinate lessons with time and often have nutters in their support systems. 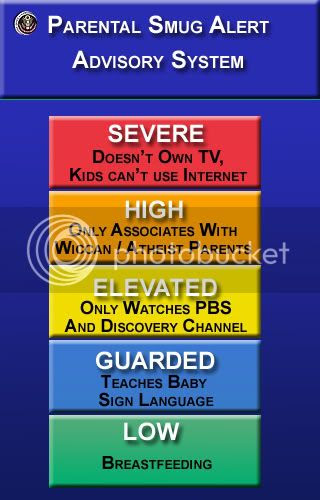 Smug parenting is made to order at family gatherings where cousins and siblings try to outdo each other on their parental prowess.

I coached soccer fora while until the soccer moms got on me.

The Mistress of the Dark said...

Parenting styles come and go, as other fads. They best approach is to avoid extremes.

Clarissa -- Unfortunately, that is the case.

Mistress -- I agree. Those kind are too extreme.

i am not a parent - except to 4-legged critters. i believe god recognized my limitations early. :)

Try the Smug Parent Game (with a sense of humor.

Some parents overemphasise the importance of the telly in childrens' lives.

I tried the smug parent game. Some of those high score items seem so far fetched.

I've gone beyond smug parenting. I'm working on being a smug grandparent. I can't help it if I have the world's smartest and most beautiful grandchildren.