On a Beach in Florida

Since I was near the Florida coast, and had a few hours' down time, I decided to get a little relaxation and sun.  t was a warm day, there was an inviting breeze, and it was still early enough for my avoiding the dangerous rays of the sun with the judicious use of sun block.  I changed into my swim suit, took a large towel, chose an unoccupied section of the beach (It was before the season and a weekday), spread my beach towel for my moment to chill out, metaphorically, if not in fact (it was in the low 80's), and untied the string in the back as I lay down in order to avoid the tell-tale line of whiteness.

Within a short amount of time, I heard a throat cough, and looked up to see a middle-aged minion of the law.  He was troubled, but I could not tell why.

I demurely clutched my upper garment to avoid inadvertent immodesty, and asked him how could I be of assistance.  I find that, if I try to act helpful, then most southern police officers go into their default "be charming with the ladies mode" and it disarms them from whatever might have been my offense.

"Wear sunblock?" He shook his head.


"The bikini?" He nodded. Now I was beginning to worry.  Did Florida suddenly get hypermodest, a detail missed by us heathen Louisianans?  If so, I was, in the words of a former President, in deep doo-doo.


Finally I understood. He was uncomfortable with the task of having to get after me for my having unfastened my string, even though I was lying prone and exposed very little of the side and back that wasn't already open to view!  (My niñas were properly still in the cups.)  This was despite the fact that no one else was around, and I would not have been judged indecent anyway, had one been around, much less someone from a distant high-rise!  I thanked him, and complied with his request.  (I resisted the impulse to give him a reassuring hug or ask him to re-tie me.)  After all, it was disagreeable for him to be called on to fuss at me, and we Louisianians should have good manners when we're in foreign parts!

Afterwards, I thought of the old philosophical question, "If a tree falls in a forest and no one is around to hear it, does it still make a sound?" Could the same rule apply here? "If someone is on a beach with her bikini top undone, and no one around to see her, is she still indecent?" 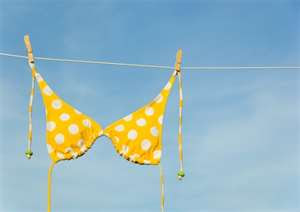 Are you sure that that was all he had in mind? He might have wanted a peek.

You could have objected to him doing that.

Angel, I think you dealt with the situation right, and were kind to your reluctant policeman. BTW, I live the term ninas!

I think that women should be able to go topless on beaches.

I think they should be allowed on selected beaches; and that all be warned about that possibility.

Florida is a land unto itself, full of strange people who are more interested in minding your business than their own. You were doing nothing wrong, and the policeman SHOULD have been embarrassed about speaking to you about it. BTW, having lived in Germany - where topless women on beaches are not unusual - for many years, I can tell you that my observation is that most ladies who go topless ... shouldn't. I'll leave it at that.

You can go topless on the beach at St. Martin. The French are cool with it.

Bilbo, I agree with you about the density of busybodies in that state. I do think that the policeman was okay with me, but was called upon to serve some xenophobic powerful resident who wanted the outsider off his/her nominally public beach.

And Florida, like Fark.com, does draw cranks. Let me put it this way: Dave Barry and Carl Hiassen could not be writing the same books in Iowa or Connecticut.

You mean you can't untie the top? Harsh.

Once I was told to re-fasten my top also by a beach patrolman.

Killjoys would do that! Let your boobs get sunshine!

During mid-week, it is okay to doff your top if the beach is empty.I've done it on occasion to get a nice upstairs tan.