The Catahoula Leopard Dog is the official state dog of Louisiana.  It is an old breed; said to be partly descended from dogs that came with Hernando de Soto.

It's commonly referred to as the Catahoula hound or Catahoula cur.  This breed is highly intelligent and energetic. While Catahoulas are assertive, they are not aggressive by nature. They have a need to take charge of their pack, whether it consists of other dogs or humans.   Catahoulas in general are very even tempered; but tend to be dominant if allowed to be.  They require firmness,

Catahoulas are very serious about their job when they are working dogs. Specifically, they can make good boar hunters; but are also especially good at herding cattle or pigs.  They make a good family dog but require extensive daily interaction with their owner.  Specifically, longer runs or walks is a nearly daily requirement.

When a Catahoula is raised with children, the dog assumes the responsibility to look after and protect those children. Many owners will say that the Catahoula owns them and they can be insistent when it comes to meal times, play time, or do other activities. Catahoulas are protective and a natural alarm dog. They will alert one to anything out of the ordinary.

With a Catahoula you cannot forget that you have a high energy, personable dog.  This is not one for apartment living, but one that needs to run and be all the dog he or she can be. 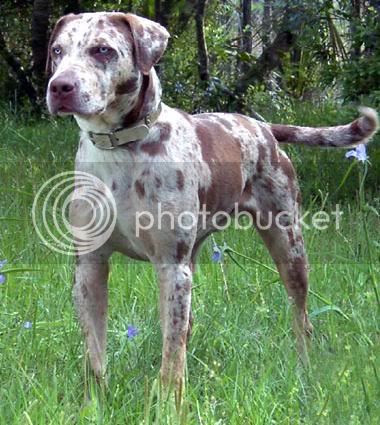 They're beautiful, intelligent, and courageous dogs. But definitely need the outdoors!

i have thelma and lousie that we rescued off the back road where they had been dumped at about 8 mos. of age. i'm sure they were a handful and someone decided to discard them. fed them for 2 1/2 weeks, 2 or 3 times a day before i could get close enough to grab them, stuff them in my car and bring them home to run*a*round. they were terrified, then they began terrifying the ducks, cats and any critter on the place. and the huge bull and mama cows that resided next door.

but they are the best country dog, ever. and even though they have wreaked havoc, i love them.

That is a pretty dog; but with freaky eyes,

You can delete this comment after reading. Suggestion, the word "due" in your opening paragraph is not up to your usual great writing. Just an honest response because you are seriously a writer. Fondly,

Thank you for your editorial suggestion, Cloudia! You have an unerring sense of style.